We use cookies to provide you with a better experience. By continuing to browse the site you are agreeing to our use of cookies in accordance with our Cookie Policy. In addition, the California Consumer Privacy Act ("CCPA") provides certain rights with respect to your personal information. Please click here for more information.

The AIA Indiana Gold Medal is the highest honor AIA in Indiana can bestow on an individual. The Gold Medal is bestowed in recognition of their significant accomplishments in promoting the aesthetic, scientific and practical excellence of the profession, advancing the science and art of planning and building as well as advancing the standards of architectural education, and training. It is also awarded to those who exemplify many years of service to the society through service in the AIA and other voluntary endeavors. The 2018 Gold Medal Award winner is LeRoy S. Troyer, FAIA.

LeRoy was born on November 23, 1937 to Seth and Nancy Troyer. The household that he was born into was a traditional Amish household in Northern Indiana. In his early formative years, he did chores around the family farm in Middlebury, Indiana including milking cows when he was five years old. He married Phyllis Eigsti in 1958. In 1959 their son Terry was born and in 1962 identical twins Don and Ron were born. Their marital years were spent living in Goshen and South Bend. Today Phyllis and LeRoy reside in South Bend in a house that he designed and oversaw the construction of. 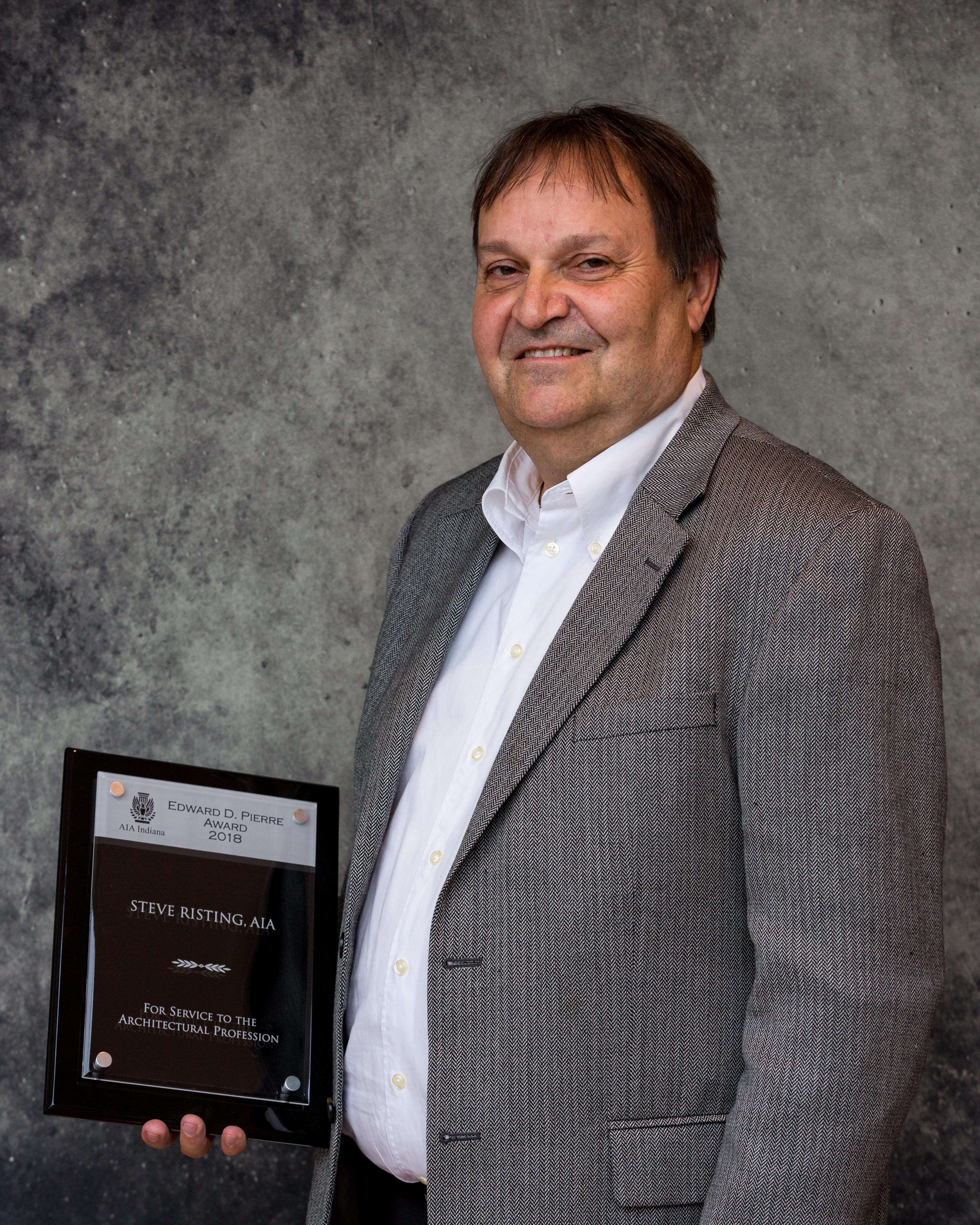 Presented annually it is named in honor of Edward D. Pierre, FAIA (1890-1977). He was a crusader for the welfare of children, decent housing for all, peace and progressive urban planning. Mr. Pierre was recognized repeatedly for his outstanding service to the architectural profession and the public. To honor his service, this award is presented for advocacy for architecture as a civic and community leader as well as service to the profession and to the public.

This year’s winner of the Edward D. Pierre Award is Steve Risting, AIA, of atelierRISTING llc, Indianapolis, IN.

In his nomination letter, Tony Costello, FAIA, said Steve Risting’s multi-faceted career mirrors that of Edward D. Pierre, an architect who was a crusader for the welfare of children, decent housing for all and progressive urban planning.

Steve has been an advocate for the preservation of mid-century modern architecture. He’s involved with Indiana Modern and has been active within the design community here in Columbus. He is president of the Columbus Indiana Architectural Archives. He has designed new or renovations to five buildings in Columbus, including the renovation of two Harry Weese projects, the St. Bartholomew Church, Cummins’ Commons office building and expansion. He has presented nationally on how Columbus has strategically created a better community with modern architecture.

Steve also is passionate about educating young designers. He’s an adjunct instructor at Ball State. After working at several large Indianapolis firms, he established his own firm – atelierRISTING – to focus on mentoring emerging professionals.

Originally from Iowa, where he received his bachelor’s, he earned a masters at Harvard University, before moving to Indiana in 1987. 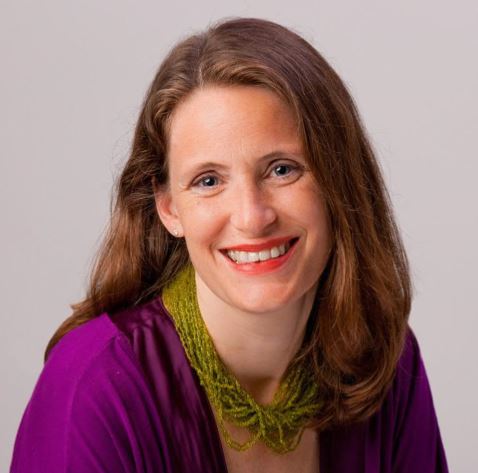 Recognizing an individual architect for their strong willingness to pioneer, being successful in breaking new ground, strong devotion and commitment to architecture, display of professionalism and perseverance, and having a kind spirit, this award is named after the first female registered architect in Indiana. A Terre Haute native, Juliet Peddle (1889 – 1979) was the second woman to graduate from the University of Michigan School of Architecture. She co-founded the Chicago Architectural Women’s Forum, operated her own office for over 30 years, and worked diligently to enlighten her community on the value of historic structures.

This year’s winner of the 2018 Juliet Peddle Award is Sarah Hempstead, AIA. Sarah has a strong devotion and commitment to architecture, displays professionalism and perseverance and has a kind spirit.

Sarah is an expert at combining inspiration and perspiration. CEO of Schmidt Associates in Indianapolis, and principal-in-charge of the higher education studio, Sarah is a passionate designer and tireless problem-solver. She inspires others, and has helped the firm more than double sales and increase staff by more than 20 percent in the last two years. 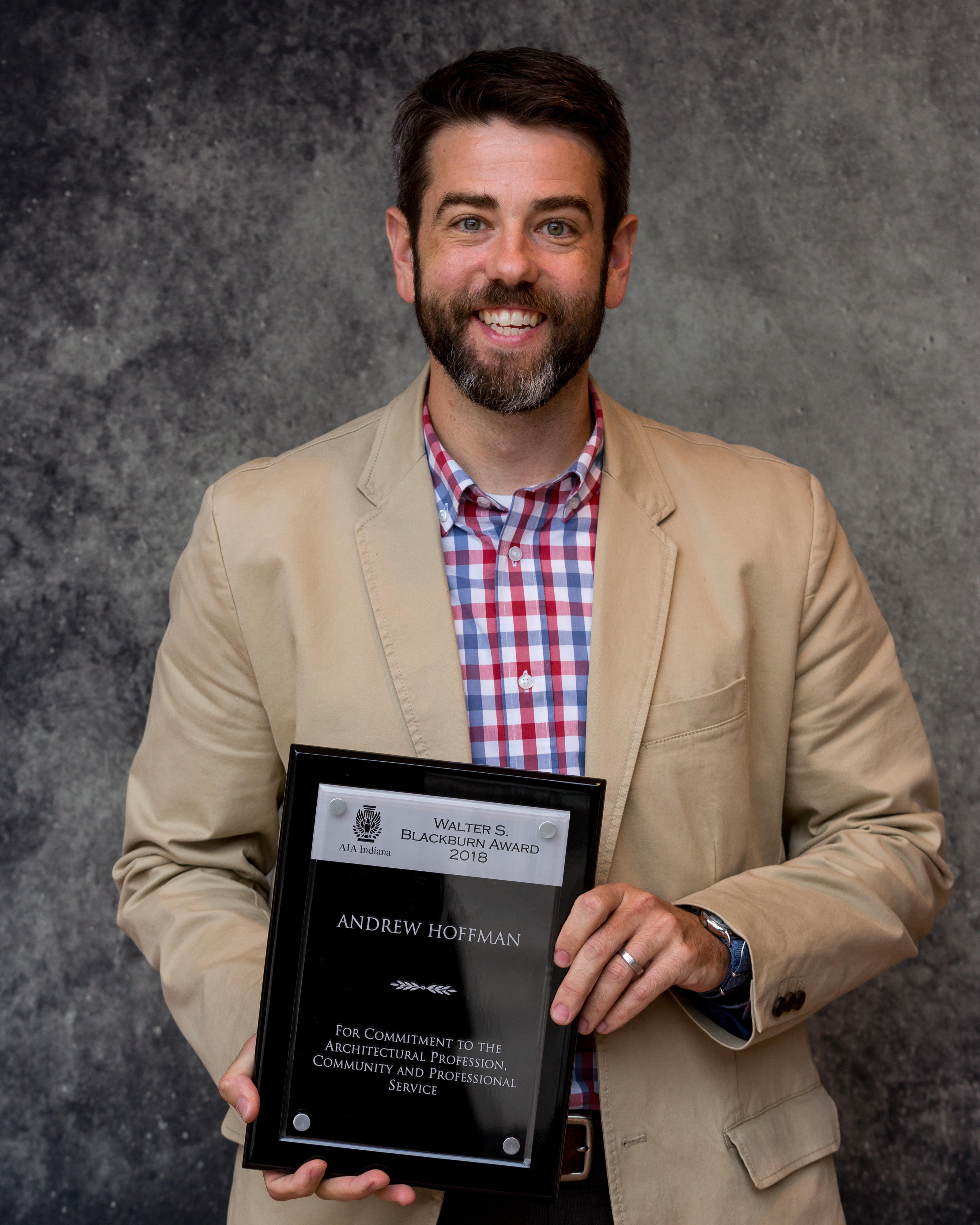 Walter S. Blackburn was an African-American architect elected to the College of Fellows in the 1980s. He chaired the AIA’s Diversity Taskforce in 1992, and shortly thereafter, was elected as its Vice President. His career also included many terms of service in the Indiana Arts Commission and on the boards of numerous local arts organizations and nonprofit institutions.

Successor to the Don E. Gibson Award, this honor is bestowed upon a non-architect public member or organization that has contributed of their time and person in service to or support of the architectural profession in Indiana, or an architect who has exemplified professional and public service as Blackburn did.

This year’s winner of the Walter S. Blackburn Award is Andrew Hoffman, Executive Director, NeighborLink, in Fort Wayne, IN.

Walter Blackburn was a visionary who cared deeply about his community. It’s why we created this award to recognize a non-architect, who is making a difference. Andrew Hoffman not only is making a difference, he’s leading a movement built around a very simple philosophy: Love Thy Neighbor.

Andrew believes that social innovation and the power of a healthy neighborhood can transform communities; he has a deep conviction that the best kind of community starts with an individual seeking the best for his or her neighbor, who not only invites others to belong, but to participate in the life of the community.

Andrew is a visionary, and he doesn’t follow the traditional model of nonprofits, which has helped this nonprofit excel and make neighborhoods stronger in Fort Wayne.

In his letter of recommendation, Zach Benedict, AIA, MKM architecture + design, inc. said, “Sometimes we forget why we became architects. And sometimes it takes a non-architect to remind us. That’s the gift Andrew Hoffman has given me over the last ten years…His work has given a voice to the vulnerable and created a movement that has empowered neighborhoods to take ownership of the quality of life they provide their members.” 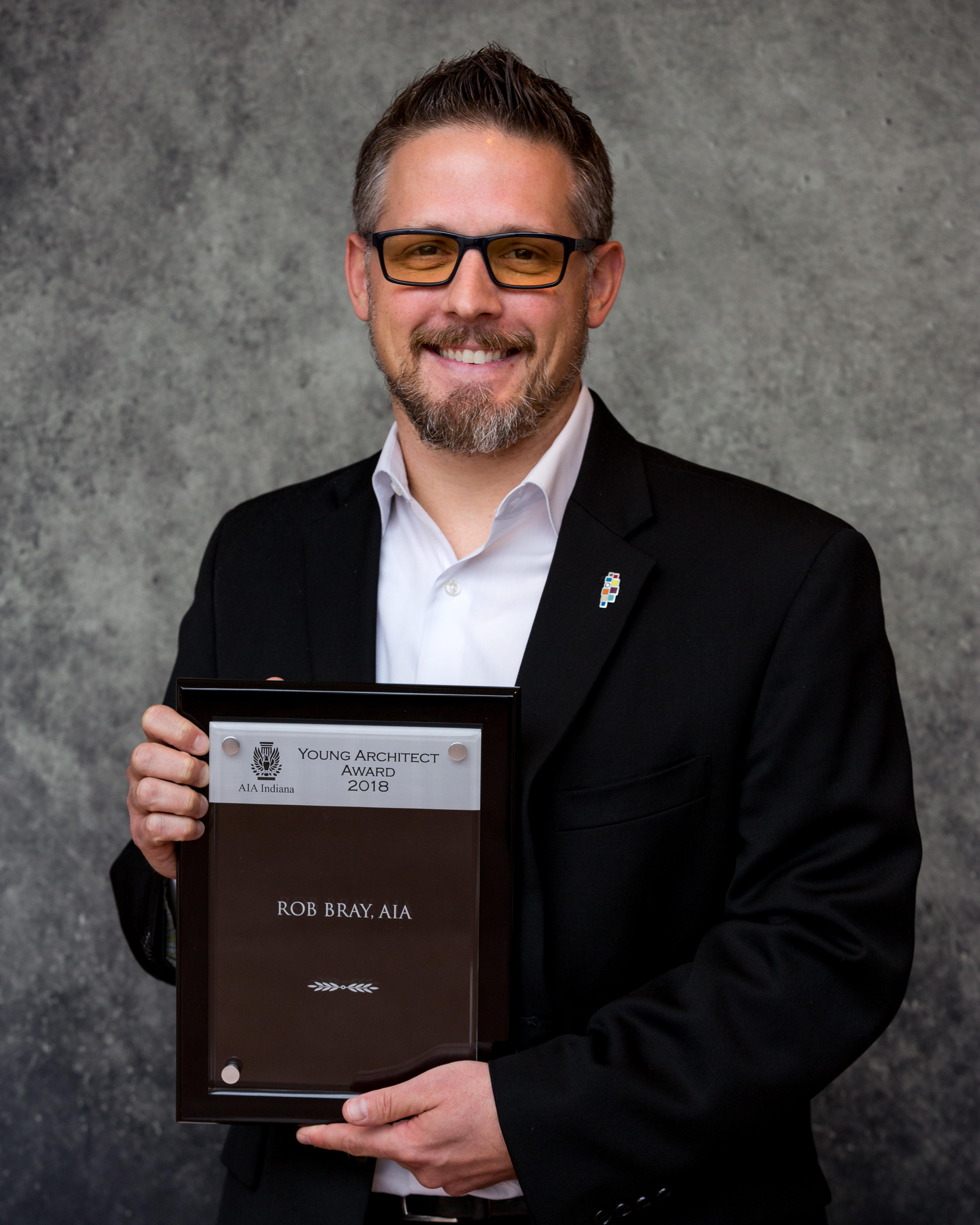 This award was created by the Board of Directors of AIA Indiana to recognize proficiency and exceptional accomplishments in, and contributions to, the profession by a licensed AIA Indiana architect, 40 years or less in age. This year, the jury has selected Rob Bray, AIA, a senior designer at American Structurepoint.

Imagine this, and I know you all can relate. You’re facilitating a kick-off meeting, and there are 19 stakeholders in the room, including the building owner and physicians. We all know this is not easy feat, but it’s something our Young Architect Award winner excels at.

Rob Bray, AIA, “has an uncanny ability to keep everyone on track and make immediate adjustments when needed,” said Jeff Shively of Cornerstone Companies.

Rob is the market sector leader at American Structurepoint in Indianapolis where he’s helped grow the firm’s reputation and portfolio through his leadership and management of delivery of some of the firm’s most challenging projects.

He designed the Lawrenceburg Events Center that has re-energized the downtown core. In addition to his work with medical buildings, he is the go-to leader for corporate headquarters, including Meyer Najem, BlueSky Technology Partners, CEDIA and Knowledge Services.

Since joining Structurepoint in 2010, Rob has been architect of record on more than 50 projects.

Branden Farley, AIA, who leads the architecture group at American Structurepoint, summed it up this way: “This is a tough business—a people business—and it is quite stressful. Rob never shows this; he never lets a client “see him sweat” as they say, and his resolute ability to maintain composure is maybe the best attribute a true leader can have.” 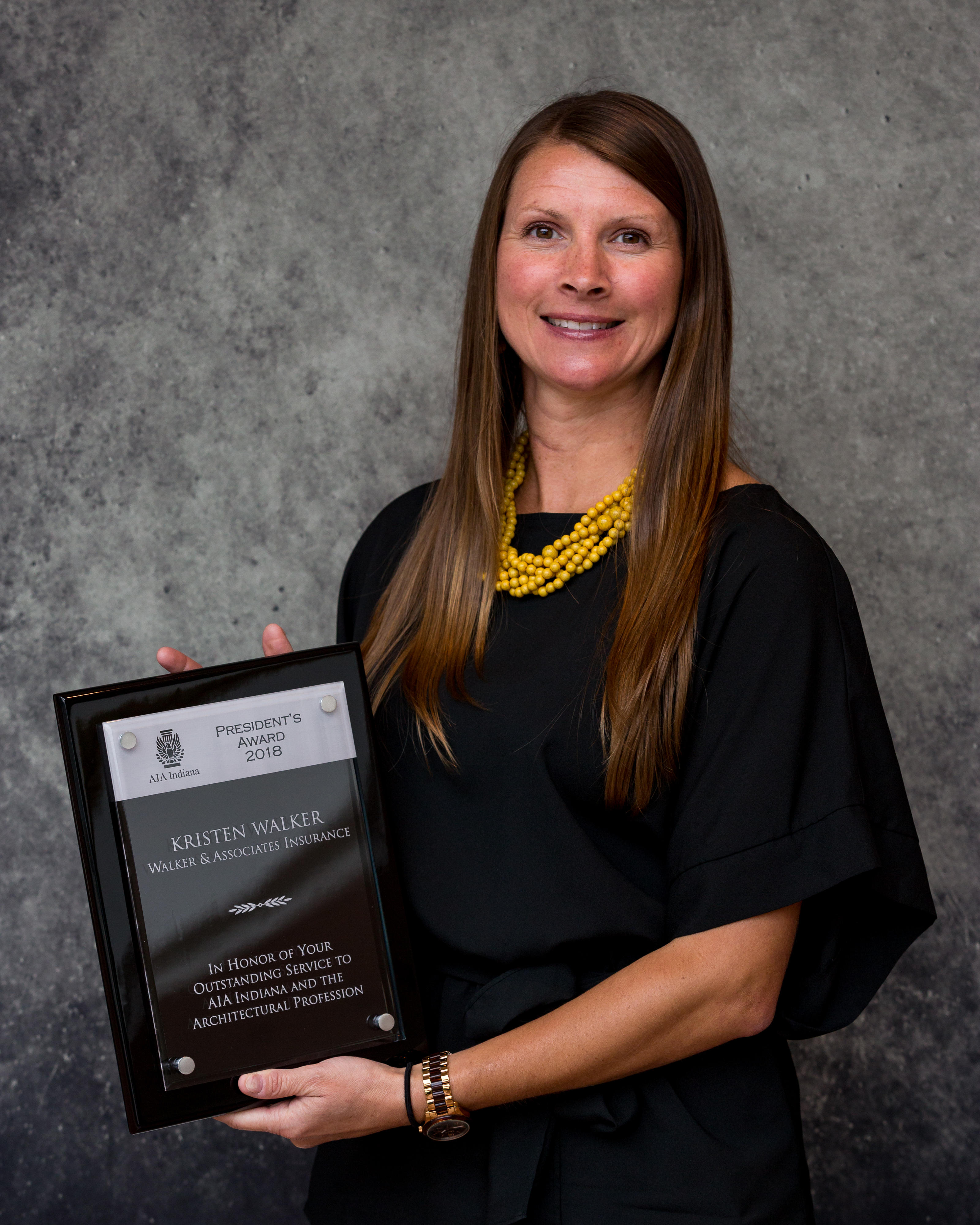 During this past session of the Indiana General Assembly, Kristen provided expert testimony before House and Senate committees regarding House Bill 1015, which called for changes to Indiana's anti-indemnity statute that would have prohibited a design professional from being responsible for defense costs unrelated to the design professional's work, and in any event not insurable. Anyone who has experienced lobbying or testifying at the Statehouse knows it comes with all kinds of stress, challenges and uncertainties and Kristen handled it like a pro!

Furthermore, Kristen and Walker & Associates Insurance have been consistent sponsors of AIA Indiana and also have created an insurance discount program for Hoosier AIA architects. 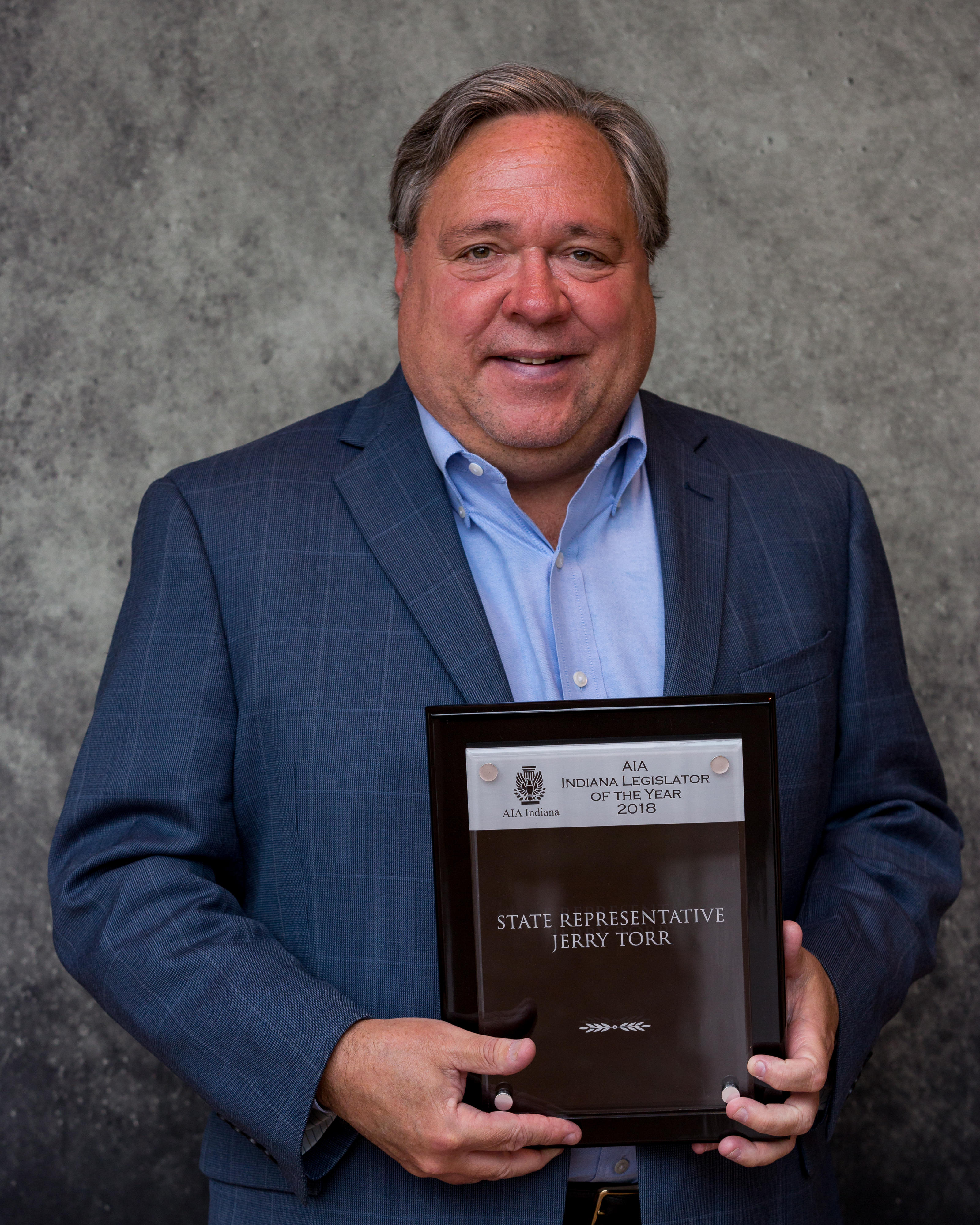 Legislator of the Year

Congratulations to State Rep. Jerry Torr, the 2018 AIA Indiana Legislator of the Year. Rep. Jerry Torr always takes time to listen to the concerns of AIA Indiana and his architect constituents. Rep. Torr is a respected voice of reason in the Legislature. This past session Rep. Torr was the author of House Bill 1015, which called for changes to Indiana's anti-indemnity statute. Section one of the bill was particularly important this year given a recent court case requiring certain construction site managers to be responsible for the negligent acts of others working on site. Section two of the bill prohibited a design professional from being responsible for defense costs unrelated to the design professional's work, and in any event not insurable.

See stories from other regions.